Women’s Hall of Fame induction 2022: Who was inducted? 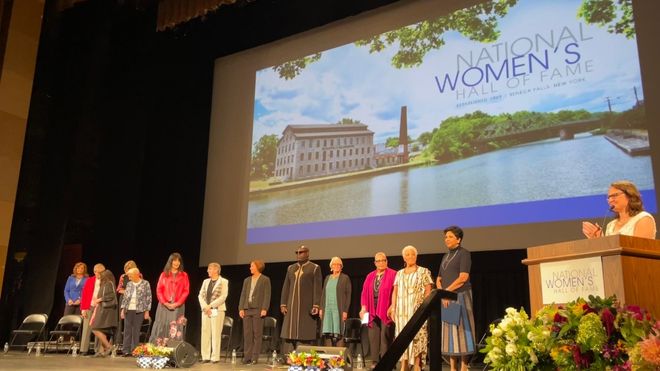 This past Saturday, September 24, 2022, nine women were inducted into the National Women’s Hall of Fame.

Who are the nine inductees and where was the ceremony held?

Run Towards It: Empowering young female athletes in competition (video)

Where was the induction ceremony?

The National Women’s Hall of Fame is located right in Seneca Falls– the hometown of the Women’s rights movement. September 23-25 there were celebrations to honor the lives and achievements of the newest inductees. Although there were celebrations in Seneca Falls all weekend, the 30th Induction ceremony took place at The Smith Center for the Arts, in Geneva. This venue was selected in order to accommodate the number of guests in attendance. Both Governor Kathy Hochul and Hillary Clinton spoke at the event.

Only three of the nine inductees were present at Saturday’s ceremony– three have passed, and the other three joined via zoom. The women most recently inducted into the National Women’s Hall of Fame are:

Octavia was the first science-fiction writer, and one of the first Black women, to receive a MacArthur “Genius” Fellowship grant. She also wrote several award-winning novels. Since her death, sales of her books have increased dramatically. Her Afrofuturistic, feminist novels have become more relevant. Her life and her works have been highly influential in science fiction, the literary world and popular culture– especially for people of color and marginalized communities.

Judy is an artist, author, feminist, educator, and intellectual. She is known for her large-scale, collaborative art installation pieces about birth, creation, and the role of women in history and culture. The Dinner Party is her most well-known piece. More than a million people have seen the painting, after its sixteen exhibitions at venues in six different countries. Now, it is permanently housed in the Elizabeth A. Sackler Center for Feminist Art at the Brooklyn Museum.

Rebecca “Becky” Halstead achieved multiple historic milestones during her almost three-decade career in the military. 2004 she became the first woman in U.S. history to command in combat at the strategic level when she was promoted to senior Commanding General for logistics in Iraq.

Mia is well-known as a soccer icon, but retired after 17 years, two World Championships, and two Olympic Gold Medals. At just 15, she was the youngest woman ever to play in a match for the U.S. Senior Squad, followed by many other accomplishments.

Joy is a member of the Mvskoke Nation and a multidisciplinary artist: a poet, musician, playwright, painter, and author. Her poetry often focuses on the need for remembrance of ancestral lands and culture, and the power of language and song to return us to a balance with the earth. She is a founding board member and chair of the Native Arts & Cultures Foundation and a Chancellor of the Academy of American Poets. Harjo is also a member of the American Academy of Arts & Letters, and is the 23rd Poet Laureate of the United States– the first Native American to hold this honor.

Emily Howland is known for her activism and interest in education equality, women’s rights, and the temperance movement. She practiced the teachings of the Quaker community and continued to actively fight for equality. Howland also taught at the Normal School for Colored Girls (now University of the District of Columbia) in Washington, DC from 1857 to 1859.

Katherine Johnson worked as a NASA mathematician, and a pioneer in racial and gender equality. She was also a contributor to one of our nation’s first triumphs in human spaceflight. In 2015, President Barack Obama awarded her the Presidential Medal of Freedom. In 2019, a bipartisan team of Senators awarded her the Congressional Gold Medal of Honor These are two of America’s highest civilian honors.

Indra Nooyi has consistently ranked among the world’s most powerful people. She is a business executive and the former Chairman and CEO of PepsiCo. She was also the chief architect of Performance with Purpose, PepsiCo’s pledge to do what’s right for the business by being responsive to the needs of the world.

Michelle Obama is an advocate, author, lawyer, and 44th First Lady of the United States—the first Black person to serve in the role. She has emerged as one of the most influential and iconic women of the 21st century. She made history with programs that she helped to implement while serving as first lady but has continued to have a profound public impact after leaving that role.

Abbi reports on a variety of women’s issues. Have a tip? Send it to abbi@fingerlakes1.com.